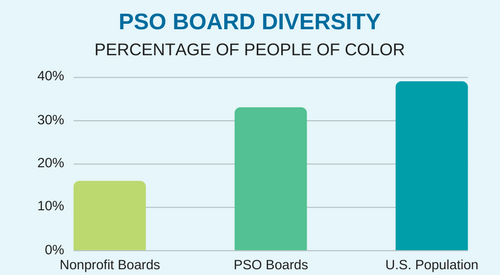 PSO boards are more diverse than nonprofit boards overall but less diverse than U.S. population. Two-thirds of PSO board members (67%) identify as white, compared to 84% of nonprofit board members in the country. However, PSO boards are not as diverse as the population of the United States, which is 61% white, suggesting that PSOs need to make additional progress to reflect the full diversity of the country on their boards.

PSOs have positive outlook on membership growth. Half of all PSOs expect to see an increase in institutional members in the current fiscal year and just 5% expect their membership to decline.

Findings presented in the "Key Metrics" eport are based on the responses of 51 PSOs to United Philanthropy Forum’s “2017 Forum Compensation, Benefits & Key Metrics Survey.” Respondents included regional PSOs as well as national PSOs that are focused on a funding issue, population group, philanthropic practice or type of funder. This report is a companion report to the “Compensation & Benefits” report on PSO employment practices that the Forum released earlier this year, based on additional learnings from the survey.