Home » Vote No on Tax Bill

Vote No on Tax Bill 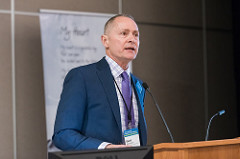 The final tax bill now being considered by Congress would cause significant harm to the charitable sector and those who charities primarily serve—low- and middle-income workers and families. United Philanthropy Forum urges lawmakers to vote No on the bill and start over.

The tax bill would result in a significant drop in charitable giving and place many other pressures on nonprofits that are already strapped to adequately serve people in need. The bill’s doubling of the standard deduction means the charitable deduction would no longer be available to 95% of all taxpayers—all but eliminating a proven incentive for giving in America for the past century. This would lead to a drop in charitable contributions of up to $20 billion next year, according to a study by the Tax Policy Center (a study by the Indiana University Lilly Family School of Philanthropy found similar drops in giving). And that’s not including the additional declines in giving that would be caused by the bill’s changes to the estate tax.

Other provisions in the bill would cause further losses in support for nonprofits. The bill’s elimination of the Affordable Care Act’s individual mandate would result in 13 million people losing health insurance and double-digit increases in people’s health insurance premiums, according to the Congressional Budget Office. People impacted by these insurance losses and premium hikes would have less money to give to charity, and many no doubt would be turning to the nonprofit sector in growing numbers themselves to receive health-related services.

This significant loss of charitable donations, coupled with a growing need for services, is no minor matter for nonprofits that are already struggling with tight budgets; these lost dollars would translate directly to reduced services for our communities. It would mean less dollars to fund food banks, homeless or domestic violence shelters, day care, job training, and on and on. It would also mean a loss of at least 220,000 jobs in the charitable sector along, according to a recent analysis by George Washington University—quite the opposite of lawmakers’ claims that the bill will create new jobs.

As the largest network serving philanthropy in America, United Philanthropy Forum urges all Senators and Representatives to vote NO on the final tax bill. The legislation would have a devastating impact on Americans helped by charities every day in every corner of our country.