Home » Investing in Our Native Youth

Investing in Our Native Youth 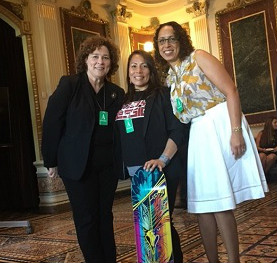 Whenever I find myself having doubts about the future of our country, I’ll meet some young people who give me hope. That was the case when I participated in a recent Philanthropic Native Youth Summit held by the White House in partnership with Native Americans in Philanthropy (NAP). The summit explored how philanthropy can address the pressing needs of Native youth with culturally comprehensive approaches that ensure all Native youth reach their full potential.

Some of the most memorable moments of the event for me were the presentations by 12 storytellers, who highlighted and celebrated innovative Native-led and Native-driven practices that have been proven to have a positive impact on Native youth. The Forum of Regional Associations of Grantmakers partnered with Forum member Philanthropy Northwest and NAP to help select the 12 storytellers from a large pool of applicants.

We heard from Teressa Baldwin (Inupiaq), who spoke about leaving her small Native village above the Arctic Circle in Alaska to attend college at the University of California, San Diego. Teressa said she experienced some difficulties adjusting to college life in California and considered leaving. What saved her was United National Indian Tribal Youth, Inc. (UNITY), an organization that works to foster the spiritual, mental, physical and social development of American Indian and Alaska Native youth. Now 22, Teressa recently graduated from the university with a degree in physiology and sociology.

We also heard from Dahkota Brown (Milton Miwok), who saw his family and friends falling behind and withdrawing from school activities as they reached junior high or high school and decided to do something about it. So five years ago—when he was just in the 8th grade—he founded NERDS (Native Education Raising Dedicated Students), an organization that helps Native youth succeed by providing peer-to-peer mentoring, funds for education, cultural support services, scholarship and intern opportunities, and youth gatherings. Now a freshman at Stanford University, Dahkota is a member of the National Advisory Council on Indian Education and is the youngest person to be appointed to a White House administrative post by a president.

Other speakers included teenager Noah Blue Elk Hotchkiss (Southern Ute Indian Tribe/Southern Cheyenne/Caddo Nation), who was paralyzed in a car accident seven years ago and thought his life was over. According to Noah, his life turned around when he got involved in adaptive sports, and he’s now on a mission to bring better adaptive sports to Native people with disabilities. Noah told me that he has received a college scholarship, and that once he’s earned his college degree he hopes to compete in the Paralympic Games.

The summit featured many other inspiring stories. What can philanthropy do to support Native youth and ensure many similar stories are told in the future? Native Americans in Philanthropy has issued a call to action that offers five specific actions that funders can take:

The Forum is proud to be a partner with Native Americans in Philanthropy for its Generation Indigenous efforts. If our country is going to be the best we can be, it’s vital that we help all of our young people—including Native youth—lead healthy and productive lives to the fullest of their abilities. I’m grateful to everyone involved in the White House event for demonstrating the positive contributions that Native youth are making to our country, and the powerful positive impact we can have when we invest in our youth.

A new report by United Philanthropy Forum reveals some positive trends on the racial and ethnic diversity of regional and... more

Check out the latest releases from around the nonprofit sector featuring items from Alliance Magazine, Asian Americans/Pacific... more