Home » The Forum Goes to DrupalCon

The Forum Goes to DrupalCon

Last week, over three thousand developers, themers, and users from businesses, government, universities, and nonprofits showed up in Austin, Texas for DrupalCon 2014, including our own Director of Knowledge Services Val Rozansky. Val oversees the network’s Drupal-Salesforce Platform and has a pretty good handle on all this technology stuff, so we ask him to share the highlights from his experience at DrupalCon.
A Unique Community
The open source Drupal community is passionate and organized. Through the work of the Drupal Association, led by former NTEN boss Holly Ross, this year’s DrupalCon was the biggest yet. With an influx of newcomers to Drupal, the conference and the community continue to grow and evolve as Drupal has become the biggest open source system in the world.
I attend a fair number of conferences, but what I found unique about DrupalCon was that everyone at the conference seemed to come from a different background. Unlike a typical technology conference where most attendees are computer programmers with a formal degree in Computer Science, many DrupalCon attendees do not have a formal technology background. For example, our lead developer from ThinkShout, Tauno Hogue, studied natural sciences. Like Tauno, and the emerging power users in our network, many of the attendees are self-taught.  There are no degrees in Drupal, but the strong Drupal community makes it easier for everyone to get acclimated and leverage their diverse backgrounds.
Our Vendor-Partners
Our Drupal vendor ThinkShout was all over DrupalCon, from hosting BoFs (“Birds of a Feather” small group topical breakouts; or in Austin “Bats of a Feather”) to their presence in the exhibit hall to their official session on content strategy. ThinkShout’s co-founder Lev Tsypin led a session on widely used MailChimp integration module and Tauno led a standing room only session on the Salesforce Suite developed for our project and now used by over 700 sites including United Way. ThinkShout continues to lead on this work, bolstered by the rapid adoption and support of the module by the Drupal community at large.
I also got to spend some time with the team from Pantheon, our hosting vendor, which continues to grow by leaps and bounds, recently raising $21.5 million in venture capital. It was pleasing to see how much they value our relationship as an early adopter. I think it’s safe to say that our choice in the hosting partner, though risky at the time, has been validated. Our relationship is still evolving, having recently been featured in their e-book on 8 Amazing Drupal Launches, and their Director of Customer Success, Scott Massey, personally oversees our collective account.
The Depth and Power of the Drupal Platform 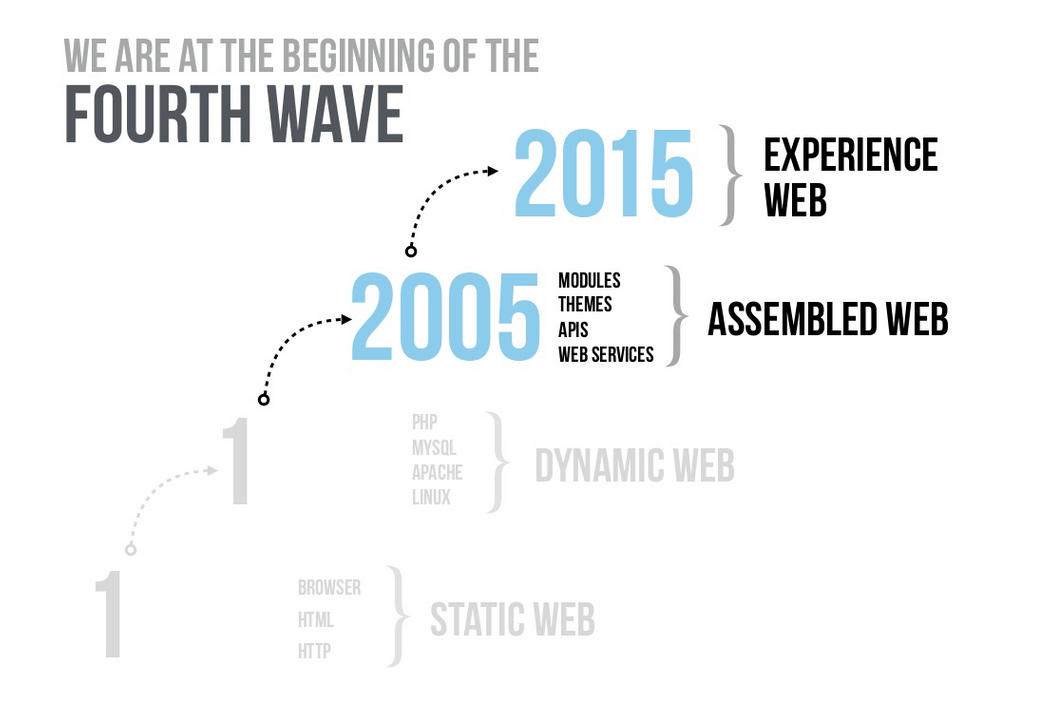 One of the highlights of the conference was the keynote by Dries Buytaert, founder of Drupal, who laid out his vision for the evolution of the web and the role that Drupal will play moving forward. I encourage you to watch the full presentation, which we’ve embedded below, but the gist of it is that Drupal is well positioned to be a critical component of the web infrastructure, powering sites for companies such as Twitter, Sony, and NBC Universal.
Many still consider Drupal as just another content management system, but that’s a gross misunderstanding. Drupal is a framework, or even a platform that enables others to build new and integrate with existing applications. In some ways, Drupal is a giant interoperability mechanism. It is pluggable in a way that almost anything can integrate with it and that’s appealing. It is moving into the enterprise world faster than any other framework in terms of adoption. With over 20,000 modules on Drupal.org, no proprietary company can match that now. As Google, Facebook, LinkedIn, Yahoo, and Microsoft continue to suck up content from websites and present them through their own properties, it’s all the more important to construct your content in a way that it can be both a data source for those “big guys”, but also provide a personalized experience for your site users. Drupal is poised to meet that need in ways that a typical content management system like Wordpress is not.
But don’t take my word for it, listen to Dries:
Looking Ahead to Drupal 8
For the Forum and Regional Associations, the move to Drupal 8 from Drupal 7 is likely two years away, but there’s plenty to be excited about. Drupal 8 is a complete overhaul of Drupal Core. Here are few key factors to geek out about:
DrupalCon All Year Long
The Drupal Association has made all the plenary sessions from Austin, like Dries’ keynote above, available on YouTube. The North American DrupalCon 2015 will take place in Los Angeles, but there’s no reason to wait to get more involved in the Drupal community. All year round, local Drupal Communities host DrupalCamps, one day training and networking sessions for users and developers. If you’re interested in taking your skills to the next level, find a group near you or join the conversations on Drupal.org.

The Forum will offer mini-grants to regional and national PSOs to support programming around rural philanthropy practices as well... more

Check out the latest resources from around the nonprofit sector featuring items from Philanthropy Northwest, ABFE, Philanthropic... more