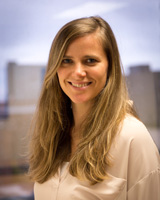 A few years ago, my colleague Mark Sedway, senior partner at The Giving Practice, helped lead a research project called The Philanthropy Awareness Initiative. PAI's aim was to help foundations and philanthropic associations “improve communications and outreach to influential Americans,” such as elected officials, business, government and nonprofit leaders. From 2005 to 2012, the researchers found that among U.S. adults who serve as staff, committee or board leaders for organizations working on community or social issues:

At the time, I viewed these statistics as an opportunity to rise to the challenge, to help bridge the philanthropy awareness gap. But last week, while attending a West Resilience Academy hosted by the Rockefeller Foundation, a sense of anxiety started settling in... Have we made any progress against these numbers?

Here’s the background…
In June 2014, the U.S. Department of Housing and Urban Development (HUD) announced a nearly $1 billion national funding competition for 67 eligible state and local jurisdictions that experienced presidentially-declared major disasters between 2011 and 2013. (All six Northwest states had at least one major disaster declaration during this time period and are therefore eligible.) The National Disaster Resilience Competition (NDRC) encourages new approaches to disaster recovery that focus on strengthening long-term community resilience “rather than simply rebuilding” – taking into consideration the risks of vulnerable populations, nonprofit and philanthropic stakeholders, and a broad spectrum of potential multi-disciplinary and innovative approaches to planning.

Rockefeller Foundation (big kudos here for their vision and execution) launched the National Capacity Building Initiative to help support all eligible jurisdictions as they began to plan for their grant applications. Since November 2014, the foundation has provided support in the form of convenings, advisory calls and technical assistance “academies." The goal is to not only ensure all jurisdictions have access to the best available tools, resources and information as they prepare their applications, but to “grow resilience planning capacity in leaders and governments across the country.”

During my participation in the West Resilience Academy last week, a Community Development Block Grant compliance expert encouraged applicants to think deeply about how they can best leverage dollars and influence outside of HUD to maximize the impact of their proposed work. A wordle was shaping in my head as I heard various jurisdictions discuss their proposed initiatives:

So how did we get to a place where so many influential leaders do not understand the role of philanthropy?
Some government leaders shared encouraging examples of partnering with philanthropy. The Ford Family Foundation's leadership institute and the Colorado Association of Funders disaster planning and response work with the governor's office were specifically mentioned. I found myself quietly applauding our members who have leveraged government matching funds, provided capital to loan funds, supported government staff positions, invested in community prioritization and planning processes, and supported capacity building in rural communities and disenfranchised urban neighborhoods.

But, as the conversation went on, more questions about philanthropy and the power of private capital emerged than we had time to answer. I began to wonder how many foundation leaders - especially those who are supporting missions directly related to the initiatives being discussed - actually have strong relationships with elected officials?

Jim Canales, president of the Barr Foundation and former president of The James Irvine Foundation, told PAI researchers that: “We’re discovering we’re dealing with policymakers who have limited knowledge about foundations. Many don’t know what a foundation is or does, and that’s our fault, not theirs. It’s not about a one-time effort; it’s about persistent, consistent, ongoing ways to build relationships and understanding.”

Where do we go from here?
As a first step, specifically related to the HUD NDRC, we encourage you to connect with leaders in the eligible jurisdictions: states and/or counties that received a presidential major disaster declaration between 2011 and 2013. Philanthropy Northwest can facilitate these relationships via HUD's Office of International and Philanthropic Innovation.

Then, we encourage you to participate in Foundations on the Hill, a national convening of philanthropic organizations in Washington, D.C. We are in the process of setting up meetings with congressional offices from each of our six states and would like you to join us. This is your opportunity to share your views on the latest charitable sector legislation, tell stories of foundation impact in the Northwest and connect with other funders interested in public policy and advocacy.