Home » Dispatch from #ForumCon19: A Master Class for Philanthropy in Listening

Dispatch from #ForumCon19: A Master Class for Philanthropy in Listening

This is a guest post by Vince Stehle Executive Direct at Media Impact Funders. It originally appeared on The Chronicle of Philanthropy. 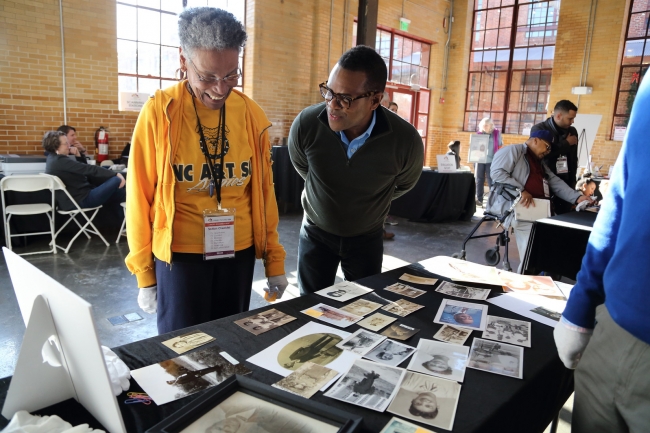 Throughout America today, headlines reveal political division, racial animus, and horrific episodes of gun violence sparked by xenophobic ideology. In mass media and through direct expression in social media dominated by angry political invective, it seems that America has never been more divided.

Along comes a new show on PBS — Family Pictures USA — that portrays a very different America: a land filled with communities that embrace and reflect the rich tapestry that is our nation’s culture and ancestry. And not a moment too soon.

In our present moment, when appeals to racism have never been more open in our lifetimes, it is important for all of us — especially people in the nonprofit world — to strongly condemn white supremacy and politically motivated hate speech. But it is equally important to tell a different and more compelling and attractive story of America that celebrates our unique blend of cultures from around the world.

In its national broadcast premiere tonight, Family Pictures USA does just that. In its pilot season of three programs, Family Pictures will present families in North Carolina, Florida, and Detroit.

Filmmaker, photographer, and show host Thomas Allen Harris travels across the country, inviting people from all walks of life to share their family photo albums in a joyous — and sometimes poignant — examination of roots and fruits of the family tree.

Family Pictures USA has a special relevance for philanthropy. At a time when foundations are being urged to listen more keenly to grantees and their ultimate beneficiaries, Harris offers a master class in the gracious way that he listens intently and draws out the most profound expression of the stories behind family photo albums.

Foundations and nonprofits can use the techniques and approach behind the show to conduct their own community photo-sharing events, with or without the direct assistance of the Family Pictures USA team. Also relevant for philanthropy is the opportunity for donors to get behind Family Pictures and other similar media projects that have the potential to reshape the narrative on critical issues like immigrant rights and racial equity.

An example of how Harris does this comes in the opening episode focusing on North Carolina.

“In a growing and changing Durham, a Korean-American pastor of a Southern Baptist congregation is par for the course,” he notes. He captures Pastor Lawrence Yoo and his wife, Jina, sharing family pictures of their parents and their own childhood photos, describing their immigrant pathways.

But they have also dedicated their congregation’s mission of serving immigrants in Durham. Another picture they share portrays the couple with a family of Congolese immigrants, filled with joy in their native dress and their adoptive homeland.

In nearby Burlington, a particularly powerful segment focuses on a visit to the Alamance

County Historical Society Museum, the former home of the Holt family who controlled a large complex of textile mills. This scene features descendants of two Holt families: owners and slaves. Of particular note among the artifacts on display is the story of Caswell Holt, who was born into slavery but after the Civil War became the state’s first black deputy sheriff. Caswell Holt survived two attacks by the Klu Klux Klan and subsequently testified about Klan activity in front of the United States Senate, resulting in the arrest of several Klan perpetrators in the area.

In this segment, we hear from Jaki Shelton Green, a descendant of Caswell Holt, who reflects on the gift of his legacy. “I am grateful that I carry his DNA,” says Shelton Green, North Carolina’s first African-American poet laureate, “that DNA of perseverance, that DNA of pushing through and standing up for who you know you are.”

'We Are All Human Museums'

This is an important message of the program: We are all human museums. And Family Pictures urges all viewers to engage in photo sharing among family and friends, in the workplace, and in larger community photo-sharing events. Indeed, the program has created a Photosharing Engagement Toolkit for individuals and institutions that might wish to apply the techniques and principals that contribute to a successful photo-sharing experience.

At last month’s annual conference of the United Philanthropy Forum in Cleveland, Media Impact Funders offered a preview of Family Pictures USA combined with a community photo-sharing session. There we heard from several conference participants, including Gina Jackson, program director at Native Americans in Philanthropy, who shared stories and pictures reflecting her native ancestry, including Western Shoshone and Oglala Lakota tribal heritage.

We also heard from Robert Burnett, research manager at Maine Philanthropy Center, who said he had little knowledge of his mother’s family until he recently obtained a photo that showed his mother as a very young girl with her father, Asador Ali, from Bangladesh, and mother, Lena Mulluer Ali, from St. Thomas, Virgin Islands.

In a subsequent blog posting for the Family Pictures USA website, Burnett shared a deeper discussion of the meaning of the photo. In particular, he described his growing recognition that because his white ancestry is more evident in his complexion, he has carried white, male privilege throughout his life, while his olive-skin sister carries more of the traits of their mother’s side of the family.

As Burnett says, “The fullness of my rich heritage will never be made plain by my appearance, so I must use my voice to declare and affirm it. The opportunity to share this still-unfolding family history publicly with Family Pictures USA has begun a process of healing for me and ignited a new desire to not only know but also proudly tell my story.”

Throughout our community photo-sharing experience, Nick Deychakiwsky, program officer at the Charles Stewart Mott Foundation and a board member of the United Philanthropy Forum, provided background music for the experience, gently playing the Ukrainian stringed instrument, the bandura. And then we closed with a discussion of his own family photos and history.

His parents were refugees from the Ukraine after World War II, emigrating to the United States and arriving in Cleveland where he was born. He contrasted his family’s experience with refugees seeking asylum in America today.

“We were blessed by this country, which gave my parents a chance to grow and develop. They were escaping political oppression. And it’s an injustice that this is not happening for so many people today,” says Deychakiwsky. “I just hope that all families would have the same chance.”