Foundations on the Hill 2018 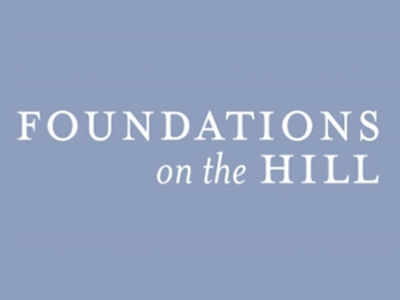 Foundations on the Hill

Foundations on the Hill (FOTH) brings together foundation leaders from across the country for meetings with Congress about key issues of importance to foundations and philanthropy. FOTH is presented by United Philanthropy Forum, in partnership with the Alliance for Charitable Reform and Council on Foundations. Foundation trustees and staff work with their regional or national philanthropy-serving organization to schedule meetings on Capitol Hill to personally discuss their work with members of Congress.

Check out the FOTH Agenda

Presenting a Fuller, Stronger Voice for Philanthropy- In his latest blog post, Forum President & CEO David Biemesderfer looks back at this year's event and how it is a part of the Forum's emerging policy strategy to create a fuller voice for philanthropy.

There are several opportunities to show your support for the philanthropic sector and reach more than 300 philanthropy leaders from across the country during the PolicyWorks Institute and Foundations on the Hill.

Find out more about being a sponsor

See the State Directory to identify the contact for your state

A Delegation Captain’s Guide for Congressional Visits
Guide for delegation captains at Foundations on the Hill with helpful tips for scheduling meetings, preparing for meetings, conducting meetings, and more.

Roles and Responsibilities of Delegation Captains
Details on the key roles of delegation captains during Foundations on the Hill.

Sample Promotional Language
See how other regional associations are promoting Foundations on the Hill with their members including email and on their websites.

Sample Meeting Request Letter
Sample letter to request a meeting with your federal lawmaker during Foundations on the Hill.

Briefing Papers on Congressional Delegates
As a part of preparing their delegations for their Hill meetings, some regional associations put together 1-2 page highlights of each Member of Congress including biographical details, legislative priorities, recent media coverage of interest, committee assignments, prior activity, etc.

Congressional Staff Roles
To those unfamiliar with Capitol Hill, the titles given to staff of Members of Congress can be confusing. In order to enable you to be most effective in communicating with Congress, we have listed the most commonly used titles and principal functions of key staff in your Representative or Senator’s office.

Key Congressional Leadership
A list of the Tax Policy Committee and the Ways and Means Committee who will be leading the conversation around changes to the charitable deduction as part of overall tax reform.

Capitol Hill Map
Printable map of the U.S. Capitol and other buildings on Capitol Hill, including the Library of Congress, Supreme Court, U.S. Botanic Garden, and House and Senate buildings.

Being Social at FOTH
Tips for how to use social media at Foundations on the Hill to share your experience and interact with your members of Congress.

Background and resources on policy issues of interest on the federal level.

Charitable Deduction
2017 marks the 100th anniversary of the charitable deduction. Since 1917, the federal charitable tax deduction has provided a tax deduction for donations made to nonprofit organizations by taxpayers who itemize their tax returns, roughly one-third of all Americans. See the Forum's position and resources on this issue.

Johnson Amendment
A current law, also known as the "Johnson Amendment," prohibits 501(c)(3) charitable organizations from endorsing, opposing or contributing to political candidates and engaging in partisan campaign activities. Three bills introduced in the 115th Congress would adversely affect this law. See our position and resources on this issue.

2020 Census
Given the importance of the 2020 census to our communities and the challenges it is facing, the Forum is leading an effort to engage philanthropy in ensuring a fair and accurate census count.

Donor Advised Funds
Donor advised funds are powerful tools – both for average people who want to make lasting commitments to their communities, as well as those with significant financial resources who are looking for an alternative to a private foundation. See the Forum's position and resources on this issue.

Simplification of the Excise Tax
A uniform excise tax rate would increase funds available for local communities by freeing private foundations from the administrative task of calculating the amount of additional eligible expenditure needed to qualify for the lower 1% rate. See the Forum's position and resources on this issue.

Other Issues of Interest

Position statements made by philanthropy-serving organizations in defence of endowed philanthropy.

Visit Funders Together to End Homelessness to learn more about how philanthropy can help advance solutions that will prevent and end homelessness in our country.

Visit the website of Forum Member Grantmakers Concerned with Immigrants and Refugees. Their site provides up-to-date resources and information to help you understand the issues and take action.

Mark your calendars for the following FOTH delegation captain calls to discuss FOTH participant recruitment, programming, meetings on the Hill and other logistics.

Join us for an all-attendee webinar on March 6 at 2 pm ET to shed light on what you will encounter on the Hill during #FOTH18 including insight into the current political climate and congressional priorities. During the webinar you will also hear an in-depth analysis of the key policy issues to be discussed at Foundations on the Hill.

This year's Institute will be held in conjunction with Foundations on the Hill. The Institute is the one opportunity each year for regional and national philanthropy-serving organizations to take a “deep dive” together to strengthen your policy and advocacy work in philanthropy. This event is designed for the CEOs and other policy leadership and staff of the Forum’s member regional and national philanthropy-serving organizations (PSOs), as well as their member volunteers who are deeply engaged in the PSOs’ public policy, advocacy and government relations work (through service on the PSOs’ board, public policy committee, etc.).